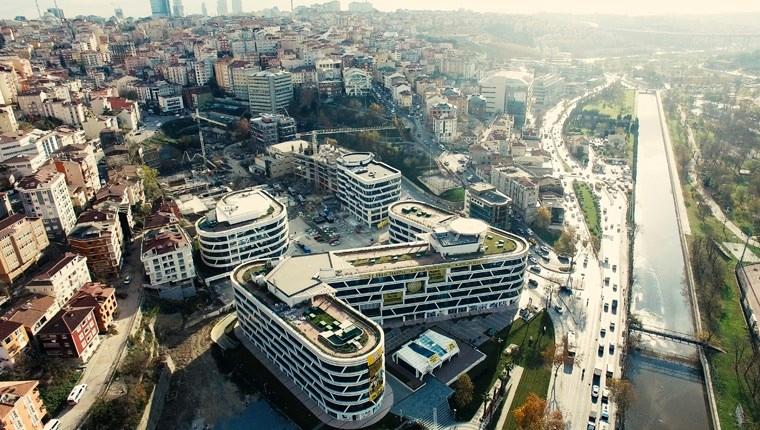 First: the European side of Istanbul

Municipalities close to the center of Istanbul

Real estate in Sisli is distinguished from the rest of Istanbul real estate: its proximity to Taksim Square is only about 2 km, as well as its proximity to the European exit of the famous Bosphorus Bridge, and Sisli is a commercial, tourist, residential meeting place.

The project area is 26,000 square meters, and it consists of a residential tower with a residence system, with a height of 48 floors, and contains 1080 different housing units.

The project is characterized by its strategic location, which makes it easy to move between the Asian and European sides, as it is next to the metrobus line and the metro and is close to Taksim Square, with a height of 158, consisting of a tower containing 35 floors, a group of homes and offices ranging in size from 193 – 73 m2 ceilings height 4 meters Average prices In the region: 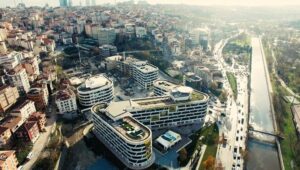 The most important feature of the area: its proximity to the main highway, ie 80E, which is the artery of Istanbul, and from it it is possible to reach the Bosphorus Bridge in only 5-10 minutes, its proximity to the Taksim area, the presence of several famous malls such as Istanbul Valley, the area overlooking the largest forest in Istanbul (Belgrad Forest) and the presence of a metro Currently, it is in use, and future metro lines will come to the area. The most important projects in it are:

Consists of 8 buildings comprising 935 housing units available from 1 + 1 to 4 + 1 The project distinguishes that it is guaranteed by the Turkish government, convenient installments and competitive prices

It has 38 floors, with 1 + 1 and 2 + 1 apartments available. The project is distinguished by its presence near the metro and its view of the Belgrade forests and the Bosphorus and the availability of apartments and offices. It is one of the most famous projects in Istanbul

The project is divided into four phases containing 11 blocks consisting of 559 apartments. The project is characterized by its proximity to the highway connecting the Asian and European section and its proximity to a future metro station linking Kabatas with Mahmud Bey area It is under construction Delivery within

. The most important projects in it:

It consists of offices and residences. It is located in the center of “Yeni Bosna” near Ataturk Airport, which increases its investment value. It is also characterized by a rental guarantee for two years from the date of delivery. The project contains an area of ​​22000 m2 consisting of 6 buildings, 3 residences and 3 offices, and the number of apartments is 441

The project is a very important investment opportunity for several reasons, including the proximity of the project to Ataturk International Airport, in addition to its proximity to the Basaksehir area, which is the future center of Istanbul, and next to the complex will be a metro station, which facilitates the use of the public transportation network. The project area is 0.132 000 m2, and it consists of two towers, one of which is residential towers with a height of 26 floors, containing 276 apartments with a residence system and a hotel tower with a height of 28 floors with a five-star rating.

The project is characterized by its proximity to hotels, many universities and schools. The project is located near a metro station, and the project consists of 3 blocks with a height of 17 floors, containing 342 housing units

The project is characterized by its view of the city and Lake Kucukcekmece, which is located on a high place, in addition to its interior view of the wide green gardens and water ponds with a distinctive design. The complex consists of 4 residential blocks, containing 517 housing units.

The project is located near the city hospital and only a few minutes away from the Basin Express and TIM Expressway. Ataturk Airport is only 10 minutes away and it is easy to reach every point in Istanbul through the new Alfa metro. The project area is 22 square meters and it consists of 5 buildings and includes 391 apartments and 26 commercial units.

In 2009, the establishment of the Basaksehir district was announced, and its own municipality was established. The area is distinguished by an important location. It is the closest area to the new Istanbul Third Airport and near the Istanbul Water Canal, which is planned to be one of Turkey’s largest projects, in addition to the third Istanbul Bridge, Sultan Yavuz Suleiman Bridge. The Basaksehir region has witnessed a large and inflated influx of foreign investors in recent years. These people prefer to invest in the region than other areas of Istanbul, where Arabs currently inhabit it, equivalent to 65% of the total population. Public transport stations are available in the region, which guarantee access to the most important areas of Istanbul Including Ataturk Airport, in addition to the famous Basaksehir metro, which connects the area to Kirazli and from there to the ancient city center.

It is located in the municipality of Basaksehir, which is considered one of the best areas in Istanbul, which is characterized by its strategic location near Istanbul’s third airport. The project consists of several phases

The coast of Bakirkoy district \ Istanbul

It is located in the European section of Istanbul on the Sea of ​​Marmara. It is considered one of the most beautiful and most important areas. It is located at an important point between Ataturk Airport and the heart of the old center. At the beginning of 1958, government interest in it began to turn into an important neighborhood of Istanbul, where many government centers and departments were built. The area is famous for the abundance of parks and gardens located directly on the sea, which makes it a destination for the residents of the area and the surrounding areas to spend their rest times. .

The project is located in the municipality of Zeytinburnu, which is considered the center of European Istanbul. The project is distinguished by its presence on the coastal road that connects Ataturk Airport with the city center. It is also distinguished by its presence directly on the sea. The important thing is that the project is guaranteed by the Turkish government, and the Marmaray metro is directly in front of the project. The project’s land area is 263,111 square meters, and it consists of 560 housing units distributed over 17 blocks at a height of 14 floors.

The complex is located in the Bakirkoy area, steps away from the Marmara Sea. It consists of 7 blocks with 239 apartments designed in the shape of 16 and 17

A project located in the Atakoy area affiliated to Bakirkoy. The most important characteristic of the project is its direct location on the main street, its proximity to the metro and metrobus and the largest exhibition city in Istanbul, including 302 apartments and 20 commercial units, the complex’s land area is 8190 square meters

Third – Municipalities far from the city center of Istanbul

Beylikduzu is located on the European side of Turkey, in one of the most beautiful parts of Turkey and one of its most important views. It has a distinctive southern view of the Marmara Sea, and also on one of its sides overlooks the shore of Buyukcekmece Bay, and its east overlooks Avcilar County, and its side The north faces the Esenyurt region

Beylikduzu enjoys a quiet, civilized way of living, as it is far from the hustle and bustle of the city, which makes it far from noise and pollution, and this certainly affects the purity of its atmosphere throughout the year and increases the population and investment attractions for it.

Real estate in the Beylikdüzü area of ​​Istanbul is distinguished by its special prices, which are low compared to the building level and the charming nature of the area, and it now has many easy and fast means of transportation that connect it with Istanbul very easily.

Its most important projects:

A huge investment and tourism project in the quiet area of ​​Beylikdüzü on the coast of the Marmara Sea, with a charming view and a private seaport for lovers of luxury and architectural sophistication. Apartments, including villas, some ready and some under construction

The project’s land area is 30,000 square meters and consists of 442 apartments distributed over six residential blocks at a height of 12 floors. The project is close to the sea and its price is suitable compared to the previous project and the presence of a Turkish bath inside each apartment

The project area is 426,44 square meters, and it consists of 9 buildings, 1160 apartments and 77 commercial units. The project is distinguished by the presence of a guarantee of resale and leasing and the presence of a large number of shops, which encourages the turnout for

The project is located on an area of ​​8705 square meters, 424 housing units, 54 commercial units and 11 floors. The project is characterized by low prices compared to the prices of the region and its presence on the main street directly in Belek

The project area is 92,000 m2 and it consists of 17 residential buildings of different heights 5/8/13/15 floors and contains 1156 housing units. Beylikduzu is close to the main street and close to the Marmara Sea

Bahçeşehir Gardens is characterized by being irrigated with water that is recycled after being used in a large station and the opening of a metro line that connects Bahçeşehir, the central district of Mecidiyeköy and Mahmud Bey district in a period not exceeding 20 minutes, and in a line that will extend for approximately 16 and a half kilometers, passing through 9 stations Among them is the famous Bahcesehir in Istanbul.

The project includes 9 modern residential towers of different heights and wonderful views. The project area is 42019 square meters with 70% green spaces. The project is guaranteed by the Turkish government and has a comfortable installment of 3 years

The project consists of 2500 apartments. In the complex, there are apartment models from 1 + 1 to 4 + 1 of various sizes. The project is characterized by its proximity to Bahcesehir Center, Akbati Mall, and the metro station, and the most important feature of the second phase is the presence of a comfortable 60-month installment without interest.

The project consists of several residential towers of various heights ranging from 4 / 26 floors. The project contains 1739 housing units. The project is characterized as being ready for delivery and its magnificent view of Bahja Gardens

Third: Buyukcekmece The region is located in the European section of Istanbul and is located parallel to the coast of the Marmara Sea, which allowed it to play a major role in the development of Istanbul in general, due to its relatively large area compared to other regions, and the region is adjacent to both Beylikduzu and Silivri The region includes a television broadcasting station, which is the third largest broadcasting station in the world. It also hosts the largest exhibition city in Turkey, Tuyap Fair City. In terms of coasts, there are three coasts in Buyukcekmece, which are Mimar Sinan Coast, Buyukcekmece Coast, and Albatros Coast. The most important projects in it:

A project directly on the sea, with villas and apartments, consisting of 286 Residence apartments distributed over 244 regular apartments and 42 duplex apartments.

The project is ready for delivery and consists of 3 blocks with 131 housing units. The prices of apartments are cheap compared to the previous project

Apr 25, 2022
Buying apartments in Istanbul suitable for Turkish citizenship Turkey is one of the leading countries in the real e ...
Continue reading

Apr 01, 2022
Sisli district in Istanbul Sisli is considered one of the most important areas of Istanbul, where there are many re ...
Continue reading

How do real estate companies in Istanbul hel...

Apr 01, 2022
Some believe that he is able to buy a property in Turkey without asking for it from real estate companies, b ...
Continue reading
Some Nice Welcome Message
Sign into your account
Create an account
Reset Password
Register here! Forgot password? Back to login Back to login